Robert the Bruce and his 1st wife, Isobel of Mar
(Wiki Commons) 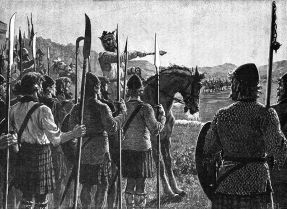 One of history’s nastiest kings was certainly Philip the Fair. In 1303, during a power struggle with Pope Boniface VIII, he sent his hatchet man Guillaume de Nogaret to Rome. There he imprisoned and tortured the pope, who was rescued by his followers, but died soon after. He was succeeded by Benedict XI, who reigned for only eight months. De Nogaret, who was back in Rome at the time, was widely suspected of poisoning him.

Pope Benedict was succeeded by Clement V, a Frenchman, who moved the papal court to Avignon and became Philip’s toady. Immediately after Clement’s coronation, Philip and de Nogaret began to plot against his bankers, the Templars.

Rumor had it that 18 Templar galleys left France for parts unknown, carrying some of the Templar treasure. Those ships vanished from recorded history; but it would have been logical, in view of the pope’s betrayal, for them to head to Scotland, where Robert the Bruce was fuming under his excommunication.

It was on these scraps of history and legend that I based my story, and spiced it with an unlikely romance.

Athena is one of my favorite female characters: feisty, passionate, and with a strong social conscience in an era that was unbearably stuffy. I can imagine her, in her old age, marching for women’s suffrage and waving her swordstick at policemen.

For a man to be worthy of her, he needs to be strong, self-confident, humorous and willing to give her free rein. It takes her a while to realize it, but Nick is a perfect foil for her.

Neither of them were the type to tolerate the hypocrisy of Victorian society.

Lord of the Forest

The year 1100 was a turning point for England. The marriage of Henry I to his English-Scottish princess began the gradual reconciliation between the native Anglo-Saxons and their Norman conquerors. This paved the way for my Adelise and Edmund to find their place in the evolving society, once they’d sorted out their differences.

It took another three centuries before the English language, under the influence of Geoffrey Chaucer, replaced French and Latin in the aristocracy. Henry IV was the first king to use English as his native language.

Karkar Island from the south

Never smile at a crocodile…

Ever since our seven years working in New Guinea, where we grew to love the country and its people, I’d wanted to write a historical set in this colorful land. There were so many interesting times and characters that it was hard to pick one, until I came across the story of Queen Emma of the South Seas (https://en.wikipedia.org/wiki/Emma_Forsayth).

That settled it. I put her in as a minor character, and the story immediately took shape.

A fragment of Gondwanaland

Mt Warning and The Sisters

It’s the home of many colorful characters. I’ve tried to give a flavor of them in my (imaginary) characters in this story. To this end, I’ve also used Australian spelling and idiom.

It’s also the perfect place for Sharon to reassess her life, and discover within herself a strength she could never have imagined in her old life with her controlling husband.

Why should aliens be bug-eyed monsters? I would think, if they were advanced enough for interstellar travel, they’d be more like my benign little creatures, capable of turning an ignorant caveman into a superior human being. Just the man that Sylvie needed. And she was just the woman that Adam needed, to join him in his quest to lift humanity into the next stage of its evolution.

“Nothing bad can happen to a writer. Everything is material”, said Phillip Roth.

That would have been the last thing on my mind several years ago, when I fell off an 25-foot-high wall to land flat on my back on a patch of sand.

On the way down, I expected to die. But, unlike what the movies and books tell you, I didn’t scream, nor did my life flash before my eyes. All I could think of, as the top of the wall receded in my vision, was that my family would never forgive me for dying so soon, and so stupidly.

When I landed, I thought, I’m alive, but I’ll be a paraplegic. Then, when I was able to breathe again and sit up, a hospital visit revealed I’d suffered nothing but severe bruising.

On another occasion, I fell off a ladder and crushed my calf muscle.

However, Roth was right: I gave those injuries to Brant. I can’t even claim originality for Bianca’s “stained glass” comment. That’s what my physio said when she saw the bruises on my butt after my first fall. Unfortunately, I didn’t get a photo.